How can a society call itself “civilized”…. 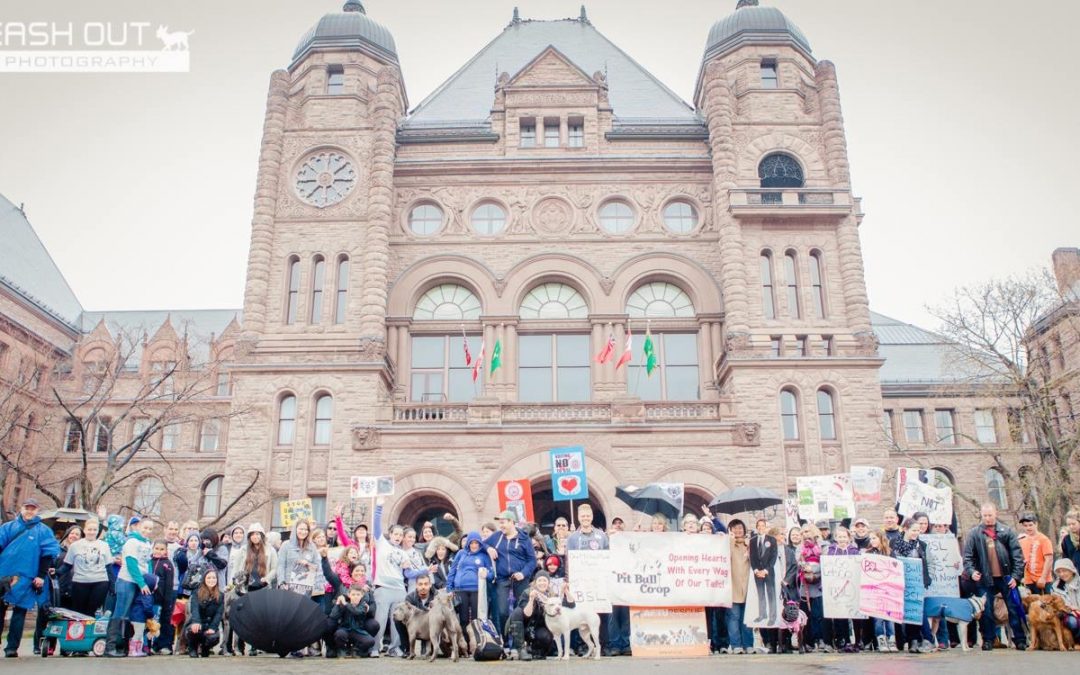 How can a society call itself “civilized,” if it can pass and uphold a law that forces citizens to chose between being a Moral Person or a Law Abiding one?”

(Submission to the Standing Committee 2012)

How can a society call itself “civilized,” if it can pass and uphold a law that forces citizens to chose between being a Moral Person or a Law Abiding one?”

To the Standing Committee on Bill 16,
I write today in full support of bill 16, “Hershey’s Bill”. My name is Debbie Black and I am the co-founder of the “Pit Bull” Co-operative here in Ontario.

The group was founded in apprehension of the ban in order to deal with the terror many owners of possible “pit bull” types felt as a result of Bill 132. Our desire was to provide our dogs with as happy and normal lives as possible. We were concerned about their ability to maintain their socialization and exercise given the limitations they were to endure. What we found is that the group also served, very much, as a support group for the owners who faced harassment and out hatred due to the hyperbolic, sensationalized, political posturing, in the media and by particular politicians.

What I believe that you already know to be true, is that “pit bull” owners were recklessly stereo-typed by the “Powers that were” at the time, as drug dealers, thugs etc. – if it was negative – it was seen to be us.

I found the labels particularly disheartening since I am a mother and grandmother and at the time an Art Teacher to school aged children.

Attached with this submission is a quick sampling of our members and their professions as well as our working mandate as a group.

You will see that there’s not a drug dealer in the bunch!
As an owner of an alleged “Pit Bull”, I attended the initial committee hearings seven or so years ago – because of this I have a good sense of the information you have heard and will continue to hear at the committee this time around.

I am not an expert but I do know what kind of evidence the experts will provide and I do know that the overwhelming testimony given by credible experts will be based on facts, science, and real Canadian Statistics.

They will prove, as they did the last time around, that a ban on a breed of dog is unwarranted and cruel. You will hear that there are already wonderful, intelligent, workable, and affordable ways to deal, positively, with all areas pertaining to Dog Legislation. These laws already exist in Calgary and have been proven to be very successful. These kinds of laws MUST be adopted here.

Removing the Breed Specific Language in the Dog Owner’s Liability Act is the first and most important step to this end. Since the experts will cover all of that I will keep my presentation on a more personal level. This past August I lost my lovely boy Rocky. He passed away from Cancer at twelve years old. He was my very first dog. Some say he looked like a “pit bull” so for his protection he was muzzled etc. Obviously, he is my inspiration as well, He was my induction into the world of the mythical “Pit Bull”. I could write volumes on the love and joy he brought to so many, even those who were previously duped by the media and certain politicians, but that would detract from what I feel I must express in this submission.

Many things happened in my life due to the ban and my position with the Co-op giving me a very broad incite into the ramifications of the law for a great number of citizens. I began to get all sorts of phone calls of people in situations that none of us could have imagined when this bill was introduced. I was astounded by the adverse situations citizens now find themselves in. Generally, do to my position with the co-op, when citizens unwittingly find themselves caught up in all of this and not knowing where to turn they call me for help. I do the best i can to guide them to a rescue, a lawyer, or a veterinarian, but often they just need someone to listen to their fears or sad situations. My friends now refer to me as the “Dog Owners Distress Line”!

Some callers have found themselves with a puppy that their kids have brought home, or a deceased neighbours’ dog, or just a stray that needs saving – they don’t know if these dogs could fall under the ban and since that is an unanswerable question, it’s very hard to advise them. I don’t hide my phone number because every so often I can help – more often, I can’t.

Here is a synopsis of one of my “situations,”.

A “Good Ontario Citizen’ telephoned me for help with the following – While walking his dogs in his neighbourhood he encountered a lost dog in danger of being hit by cars at a busy intersection. He managed to catch the dog and rescue him from the traffic. The dog was terrified and snuggled up to the citizen for protection.

He assumed, as most citizens would, that calling Animal Services would be the best thing to do to rescue this dog. Eventually, Animal Services came and picked up the dog from the Good Citizen. The Good Citizen became concerned about the wellbeing
of the dog as he was not sure what breed he was. He googled “pit bulls” and found our web site. He called me for help.

I called Animal Services on his behalf and found out that the dog had, indeed, been labelled a “pit bull”. Despite our efforts at rescue for several weeks, the dog was killed by Animal Services for being too young to be alive in Ontario.

The Good Citizen was devastated, he swore he would never again call Animal Services and will regret doing so for the rest of his life. He continually pictures that little dog snuggling up to him for protection, tail tucked, and shivering.

The Good Citizen is not a thug, as many “pit bull” folks are portrayed – not even a “pit bull” owner, in fact, one thing that i do know about him is that he works for the Ontario Government. When he called from work, that’s where he was calling from.

As you can see, Ontario Citizens are having to chose between the MORAL thing to do and the LEGAL thing to do – if that ONE sentence isn’t enough to end this disgusting law then I do not recognize this province. How can a society call itself “civilized” if it can pass and uphold a law that forces citizens to chose between Being a Moral Person or a Law Abiding one?

This law is turning good citizens into criminals – the real criminals are still criminals – thousands of innocent dogs are dead, families are broken, people are traumatized – YOUR citizens, the ones YOU were elected to represent are being traumatized, harassed, and collectively slandered by their own government.

I have personally received a death threat by Email after organizing a  rally. It was reported to the police at 14 division, August 30, 2010. I cannot urge you strongly enough to support this bill and end this needless persecution of innocent people and their dogs. You must bring integrity back to the law making process in Ontario.

On behalf of the co-op we would like to give our heartfelt thanks, to Randy Hillier, Cheri DiNovo, and Kim Craitor for bringing forth this important bill and also to all of the members who supported us at second reading. 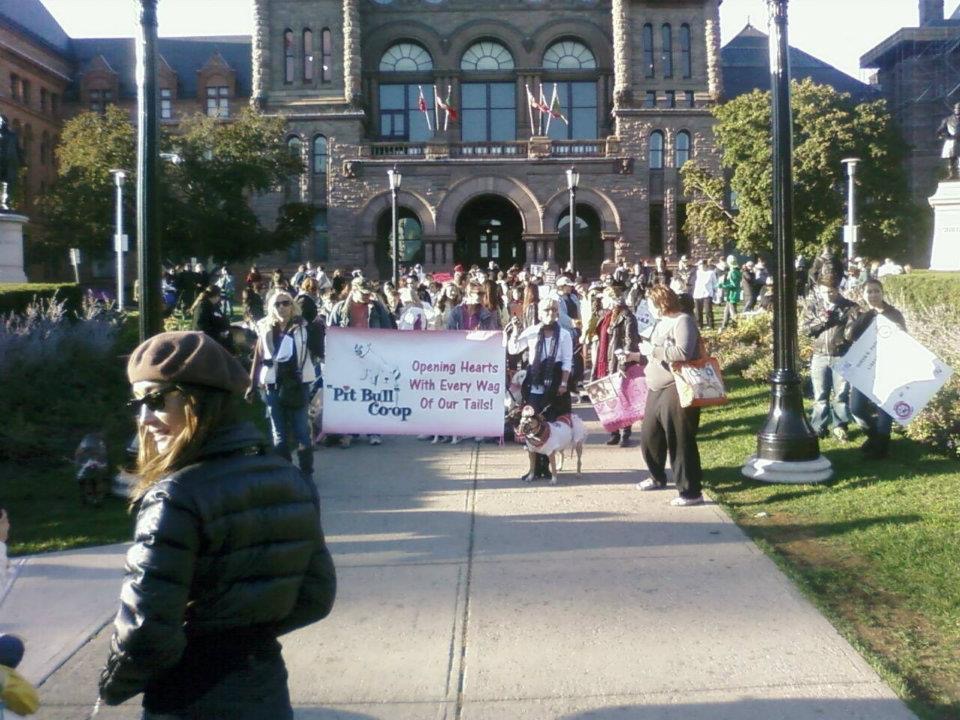